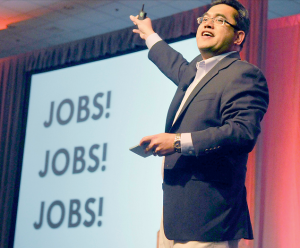 Fred Azcarate is the Executive Director of USAction.  USAction builds power by uniting people locally and nationally, on-the-ground and online, to win a more just and progressive America.

Prior to his current position Fred was Director of the AFL-CIO’s Voice@Work Campaign and Deputy Director of the Strategic Campaign Center. He led the AFL-CIO’s efforts to pass the Employee Free Choice Act – critical legislation that would restore workers’ freedom to form and join unions. He was the driving force beyond the Million Member Mobilization for the Employee Free Choice Act that mobilized more than 1.5 million union members and their allies in support of labor law reform.

For 25 years Fred has been a social movement leader, organizer and trainer. Prior his time at the AFL-CIO he served as the Executive Director of Jobs with Justice, a national coalition campaign for workers’rights, social and economic justice for nearly 15 years. During his tenure at Jobs with Justice, the network experienced tremendous growth – the number of local coalitions increased from a dozen coalitions to more than 40, staff of the network went from just a few to more than 60 and the organization’s resources grew from less than $100,000 to multiple millions. He was also instrumental in building Jobs with Justice into one of the leading organizations in the struggles for workers’ rights, global justice and other issues of economic and social justice.

Fred’s leadership of Jobs with Justice was recognized in 2002 when the organization received the Letelier-Moffitt Memorial Human Rights Award. He is also a recipient of the Reuther/Chavez award from Americans for Democratic Action. In 2006, Fred received an Alston Bannerman Fellowship (honoring organizers of color working for racial, social, economic and environmental justice). Fred was elected President of the United States Student Association in 1988, the first Asian American to hold that position. He graduated from SUNY-Binghamton with a BA in Economics in 1986. Fred is a Board Member of the New World Foundation. He is a founder of the United States Social Forum, Grassroots Global Justice and the Pushback Network. He lives in Takoma Park, MD with his wife Maria Roeper and their sons Danilo and Alexander.