The U.S. civil rights movement and subsequent quests for social equality that flowed from it, particularly in education, shaped the Foundation’s work during the 1950s and 1960s. Our early grantmaking supported dozens of civil rights organizations, such as the NAACP Legal Defense Fund and the Urban League in addition to founding grants to the Children’s Defense Fund. We also began a lasting commitment to funding in the South, one of the few foundations willing to support beleaguered Southern efforts, to help launch the Southern Regional Council and its Voter Education Project. 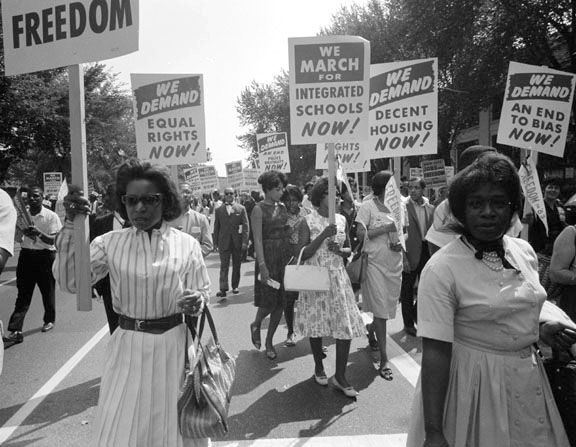 During the 1970s, New World Foundation, embracing the civil rights era as model for what social movements and organizing can accomplish, began funding independent advocacy organizations linking community needs and action to national policy and government programs. We emphasized the need to build institutions—watchdog groups, public advocates, training centers, research and information centers—that could sustain long-term social change efforts. An exemplary accomplishment of that era was the funding of the Children’s Defense Fund with NWF seed money.

By the end of the 1980s, NWF departed from the typical pattern of the “family foundation.” Lessons from social movements motivated the Foundation to establish a more diverse Board, including activists in communities who helped guide NWF through their experience and knowledge. The Foundation also intensified its commitment to bottom up base building as the engine of social movements and progressive social change. This led to a shift of grantmaking toward multi-year and general support grants at a time when that was far from typical foundation practice. To match that commitment, our board increasingly included grassroots leaders from all over the country, and our board table became a strategic planning locust for local and national progressive policies and action.

The goal here was to build and sustain long-term community-based organizational capacity to represent and fight for the interests of people in poor communities throughout the country.